After suffering a brutal head injury, Manchester City defender Eric Garcia wore headgear during the game against Leicester City. It’s some what surprising that all soccer players don’t wear the headgear during every game. Why not. Is it too uncomfortable? Surely Nike and Adidas and Puma and the like can make headgear that is comfortable and still enables you to head the ball.

Garcia’s head injury happened when his own keeper Emerson, went to clear the ball and took him out. Not sure what Emerson was thinking or obviously wasn’t thinking about Garcia’s head. A very scare incident that was like when the German keeper took out an attacking player in the World Cup. Scary to see Manchester City players react to the injury to Garcia as they shout to the referee to stop play as he lies on the field unable to move.

And yeah, Emerson clearly deserves a red card for taking out his own defender!

Schumacher collision with Battiston in the 1982 World Cup.

One of the more famous wearers of headgear is goalkeeper Petr Cech.

Again though, I’m surprised more soccer players aren’t wearing headgear all the time. Certainly keepers and maybe defenders at least. The headgear available for soccer players only keeps getting better and probably stronger and lighter overall than years ago.

Posted by admin - June 26, 2019 0
How the World’s Most Famous Athlete Tried to Conquer America I’m looking forward to Beckham’s return. It will add some… 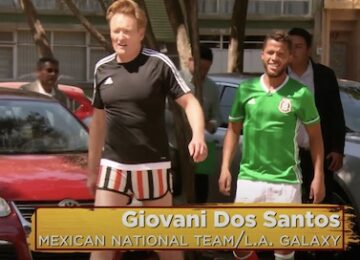 Posted by admin - June 26, 2019 0
Conan playing soccer with LA Galaxy forward Gio Dos Santos? For a second I thought it was Alexi Lalas, you…

Posted by admin - June 25, 2019 0
Barcelona La Liga Champs Barcelona probably would have bounced back and still won the game, but that was quite an… 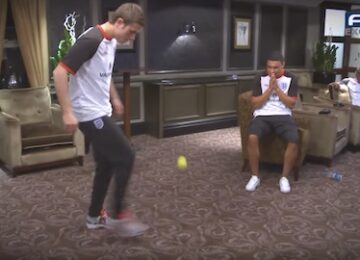 How Many Times Can You Juggle a Tennis Ball?

Posted by admin - June 26, 2019 0
These days, while working your skills at home, why not try to challenge yourself a bit more and juggle a…

Richard Dunne: Defender for Whom?