Sterling misses open goal. Even top professional soccer player miss open goal shots. Raheem Sterling misses an open-goal shot in Manchester City’s 3-1 loss to Lyon in Champions League match. This is the kind of open goal miss that can haunt a soccer player for years. Even curse them if they don’t rebound quickly and get over it. Sterling is going to have to just forget this miss and move on but it won’t be easy since City don’t have another soccer match right away.

Sterling somehow skied the ball over the goal after a perfect Gabriel Jesus cross. Was the goal too open? Did he think too much? Did he think he’d surely score? He could have walked the soccer ball in. The open goal miss by Sterling was nearly as bad as that Torres miss.

Shortly after Sterling’s open goal miss Lyon’s Demebele scored and put the game out of reach for Manchester City.

Could City have turned the game around and won if Sterling had scored? If Sterling would have scored the game would have been tied! The game most likely would have gone in to extra time. Sterling misses open goal video is right here.

Former England striker Lineker, now a presenter with BT Sport, said Sterling got his technique wrong and attempted to apply too much power to the cross from Gabriel Jesus.

“He looked like he was in the perfect position to hit it, but he’s not going to sleep very well tonight, Raheem Sterling,” Lineker said.

“I tell you why he’s missed it: because he’s tried to hit it too hard.

“When you’re in that position where you know you’ve got an open goal, the only way you can miss it is putting your foot through it, and if there is a slight bobble there is a chance it’ll go over the bar.

“It’s almost like he’s trying to hit it with a little bit of force and there’s obviously been a little bit of lift of the ball, a little bobble. But if you take the weight off it, you can’t miss.” 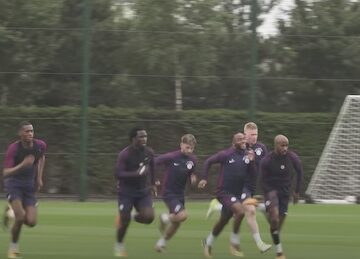 Posted by admin - June 25, 2019 0
Unlike aerobic exercise, where the body uses oxygen to tap into its energy reserves, anaerobic exercise does not require oxygen.…

Posted by admin - June 26, 2019 0
Is your ankle not improving or healing fast enough? Why not try a massaging some fluid from a horse…

Posted by admin - June 26, 2019 0
England Draws an EASY World Cup Group? By Tom Sheldrick Here’s a quick run down of the the so called…

Posted by admin - June 26, 2019 0
Just an awesome picture of the United States national team after beating Honduras 3-2 and clinching a place in the…