What is a SenseBall? What is SenseBall Soccer Training? Recommended by professional football /soccer players, the SenseBall is especially aimed at young players between 6 and 20 years of age. Practicing with SenseBall helps soccer players improve their football skills and become two-footed. Let’s learn more about soccer training with the SenseBall below.

The SenseBall is perfect for this difficult time right now while all soccer players are stuck at home and social distancing. After this crisis is over, why not emerge as a much improved and more skillful soccer player. And you will if you put the work in every day.

SenseBall allow initially normal soccer players to internalize the ingredients of modern football: speed of vision, decision-making and execution. SenseBall is one specific tool of the CogiTraining Method, which guarantees the individual technical development.

I am convinced I have mastered playing with both feet thanks to those exercises. Sometimes we did exercises to music so there was a beat urging the players to keep up the same rhythm. These training sessions are not to be underestimated! They are very difficult and demanding. And no one could lose the rhythm!

At the start, these children were not exceptional, either technically or athletically speaking. They were simply young players from the area who were passionate about football and played football in small local clubs at weekends.

Still, 6 of these 140 boys have ended playing for the male Belgian national team (among them, Dries Mertens and Steven Defour played in the 2014 World Cup in brazil). And 50% of the female players that are core members of the women’s Belgian national football team have come from this sports study training.

In other words, the CogiTraining method and SenseBall have proved their capacity to train top level players on the basis of a limited number of initially not naturally over-gifted players.

Dries Mertens Training with the SenseBall

Belgium international, has played for FC Utrecht, PSV Eindhoven and is now at SSC Napoli. Elected among the 20 best players in Europe in 2011 by Spanish sports newspaper Marca.

Sport Voetbal Magazine: At the Leuven Football Academy, you were trained by Michel Bruyaninckx, a trainer you had already met at previous training camps. Bruyninckx trains young players innovate; he even uses music during his training sessions. What does he do, exactly?

Dries Mertens: All the players were given a football on the end of a string with a handle, you had to hold the handle, juggle and kick the ball permanently with both feet. I am convinced I have mastered playing with both feet thanks to those exercises. Sometimes we did exercises to music so there was a beat urging the players to keep up the same rhythm. These training sessions are not to be underestimated! They are very difficult and demanding. And no one could lose the rhythm!

The acquisition of these skills is, among others, the result of the fact that SenseBall, the training ball developed by CogiTraining is based on the concept of bilateral activity.

During a SenseBall training session, a player uses (plus or minus 2%) his left foot as many times as his right and moves left/right and backwards/forwards through space in a balanced way.

In addition to the sport aspects, it should be noted that CogiTraining and the practice of SenseBall, by developing and organizing the brain, enhance learning at school.

This Belgian TV report highlights the positive effects of SenseBall and CogiTraining on school performances of children.

Within our sports research study in association with the University of Leuven, it has been established that after practicing our method for a year, on average children’s results at school had improved by 10% and their general behavior had significantly improved (calmer, better concentration).

Moreover, this method enhances core social values: it is together that the football / soccer players, acting as a team, have to find the solutions that will win the game (so, even the weaker players are essential to achieve this aim and deserve the full respect from the group). 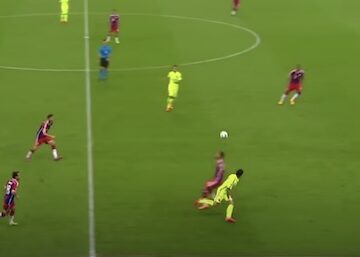 Posted by John Webster - May 3, 2020 0
Barcelona’s Luis Suarez flicks the soccer ball up and over Bayern Munich defender Medhi Benatia. Yes, this is one of…

A Breach Of Etiquette by Barcelona?

Posted by admin - June 25, 2019 0
A Breach Of Etiquette by Barcelona? Lost in the midweek Champions League fixtures was an apparent breach of soccer etiquette…