FC Barcelona sensation Ansu Fati celebrates his 17th birthday on Thursday, October 31. Born in 2002 in Guinea Bissau, the teenager joined Barça at the age of 10, and has enjoyed a meteoric rise since then. The last two months have been Fati’s breakout: He made his debut on August 25 and has broken several records over the past 8 weeks.

And by the time you read this Fati will have most likely added to his goal and assist totals for Barcelona. Imagine being able to train and play with Lionel Messi every day, that will certainly enable you to develop as a soccer player much faster! Oh, and if Messi is playing killer passes to you like this then it’s much easier to score goals too!

A lot can happen in 12 months. Just a year ago, Ansu Fati was part of the Under-18s A squad (with whom he is still registered). Now, he has become a regular part of squads in La Liga and the Champions League.

Here are some of the milestones that Ansu Fati has achieved over the past 67 days:

Second youngest LaLiga debutant for Barça. On August 25, 2019, Ansu Fati became the second youngest Barça player in history to debut in LaLiga. He was just 16 years and 298 days old when he made his first appearance. Only Vicente Martínez, who was 16 years, 9 months and 7 days old, debuted at a younger age. Ansu came on in the 78th minute to replace Carles Pérez in the 5-2 home win over Betis.

Barça’s youngest LaLiga goalscorer. In the game against Osasuna at El Sadar, on August 31, Ansu Fati found the net for the first time. He was just 16 years and 304 days old at the time, The goal came from a cross by Pérez, and was Barça’s first strike in a match that ended 2-2. The youngest starter at the Camp Nou Ansu Fati’s first start for Barça came on September 14, against Valencia. No player had ever been part of the first XI for the club at the Camp Nou at a younger age (16 years and 318 days).

Youngest goalscorer and assist provider in a single league game. In that same game against Valencia, a goal and an assist in the space of 7 minutes made Ansu Fati the youngest scorer and provider of all time in a single LaLiga match. (16 years and 318 days).

Youngest goalscorer at the Camp Nou. The goal made him the youngest man to get off the mark at the Camp Nou, be it for FC Barcelona or an away team (16 years and 318 days). Barça’s youngest Champions League debutant An appearance in the Champions League aged 16 years and 321 days was another record for the forward, who made his European bow in a 59 minute appearance at Signal Iduna Park against Borussia Dortmund.

Posted by admin - June 26, 2019 0
I’m sure every young Egyptian soccer player has always wanted to learn how to play soccer like Mohamed Salah, but… 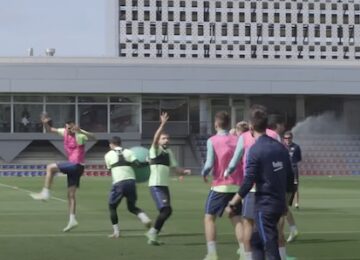 Posted by admin - June 26, 2019 0
Eboué Gets Booed Emmanuel Eboue had a rough one this past weekend. The Ivory Coast midfielder was booed as he…

US National Team Rediscovered Itself