Sure, Messi and Ronaldinho have scored some incredible individual goals over the years for Barcelona. Or, what about the bicycle kick that Rivaldo scored that completed his hat-trick put them into the Champions League. But for the greatest goal Barcelona has ever scored, I’d have to say it must be more a team goal, one that has some tiki taka football in it. That’s what Barcelona has always been about, keeping the ball and sharing it. Making that extra pass. Making other teams nearly fall over as they chase the ball. Get opposing team’s fans so frustrated they start to whistle. Barcelona is all about cutting through other teams with that killer pass and that extra give and go. Barcelona is all about keeping possession of the soccer ball and finding that perfect pass that leads to an easy goal.

According to Barcelona, with the help of their fans. After three months of anticipation. With over 500,000 votes tabulated. The verdict is in! Congratulations, Leo! The best goal ever was Messi’s goal versus Getafe (2006/07). That was of course Messi’s Maradona imitation. Yet I’d have to say that Barcelona’s best goal ever should be a more of team goal.

Here are some of Barcelona’s best team goals. It so happens that Neymar was a big part of a lot of these goals. I’m going to guess that he returns to Barcelona before his soccer career is all said and done. As someone said online: “Almost every one of the team goals started with Neymar, I hate when no one praises him for creating chances and assisting, everyone expects him to score goals all the time.”

It’s fitting the best goal for Barcelona ever should come in El Classico and away at Real Madrid’s stadium. The crowd whistling only makes it that much better. Here’s Barcelona’s fantastic build up to their first goal in their 4-3 victory in the El Classico at the Bernaubau in the 2013/14 season. Iniesta with the goal after 24 passes.

Another great team goal for Barcelona with Suarez scoring the goal after 37 passes. This too versus Real Madrid. As someone pointed out online: “The 12th pass by Dani Alves is an incomplete cross being intercepted by the head of Real Madrid Left center back. Barcelona then recovers the ball, but the string is interrupted.” Still though, for a team goal this one is up there too. 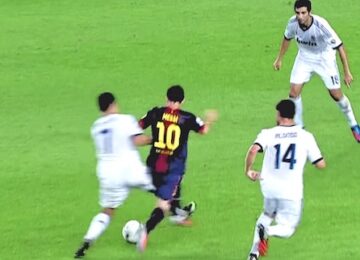 Lionel Messi vs. Cristiano Ronaldo: Who is the More Skilled Soccer Player?

Posted by admin - March 3, 2019 0
Lionel Messi and Cristiano Ronaldo are the world’s two best soccer players, there’s no doubt about that. They have an…

Posted by admin - June 26, 2019 0
Many have written off Ronaldinho now that he’s back in Brazil playing for Flamengo. However, the once world player of…

Posted by admin - June 25, 2019 0
By Cristian Caprioru There are different positions in soccer, obviously. But what’s the most important position on the field? You’d…