How do you score directly from a corner kick in soccer? The key is wrapping the inside of your foot around the soccer ball enough to get a lot of bend on the ball so it goes out and then back in towards the net. A goalkeepers worst nightmare. Especially if the goal box is full of players charging on goal to pounce on any goalkeeper errors. You’ll need to get enough bend on the ball to get the ball around the players on the near post. If there aren’t defenders there then that’s even more of a reason to try to score directly from a corner kick. While you need bend you also need power – so strike the ball with pace. Take a chance on beating and surprising the keeper by trying to score.

Watch some of these master whip the ball directly into the goal when taking a corner kick. While it’s hard to do, nearly impossible, if you strike the soccer ball with enough bend and power you can surprise the goalkeeper and score from a corner kick. Here are the best ten corner kick goals in world football / soccer.

Should you raise your hand before you take a corner kick? As a signal to your teammates that you’re about to strike the ball. David Beckham doesn’t when he takes a corner. Beckham is also known to score directly from a corner as he does here for the LA Galaxy.

Of course, scoring from a corner kick directly isn’t easy to say the least? The “gol olimpico” or “Olympic goal” – an unassisted corner kick bent into goal – is one of the rarest in soccer. WIRED’s Robbie Gonzalez straps on his shin-guards to explore the shot’s perfect mix of soccer science and skill.

Posted by admin - June 26, 2019 0
Perhaps the smoothest player to have play the game of soccer. It’s a shame he has retired from the game.…

Sierra Mist Goals of the Week 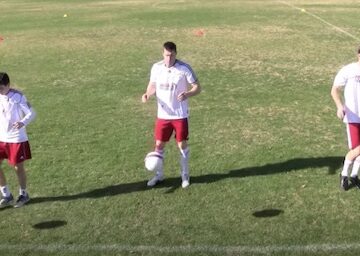 Posted by admin - June 26, 2019 0
What is a jimmy ball training ball exactly? Kenny Cooper just signed with 1860 Munich and scored on his debut,…

Posted by admin - June 26, 2019 0
Yes, it is true: Guardiola and Mourinho used to work together and were friends. Now of course Pep Guardiola and…

Posted by admin - June 26, 2019 0
Positive thinking does work actually on the soccer field. Really, it’s about moving on from mistakes and focusing on what…