If there’s one thing that Gareth Bale will be remembered for during his time with Real Madrid it’s this speed demon of a goal versus Barcelona at the Camp Nou. Bale’s incredible goal against Barcelona in the Copa del Rey final is just sensational. That’s Marc Barta pushing or shouldering Gareth Bale out of bounds, but it doesn’t stop him. Actually, it’s almost like Bale picks up speed. The hard part wasn’t done yet though. Bale still had to get the ball past the goalkeeper.

Smartly, Bale cuts inside so Barta would have to give up a penalty to stop him and then slots the ball home with the outside of his left foot – sort of a quick shot. Bale’s pace and strength is just fantastic. Barta really had no chance and can’t be blamed entirely.

“It was his most important goal, it was the most defining moment of the game,” the manager Ancelotti said.

It’s interesting that Bale is still at Real Madrid, you might think that he’d move back to play in the English Premier League since he’s not getting so much time with Madrid and is somewhat out of favor with the current manager, Zidane. Surely you’ll want to bet on Coral how many goals Bale will score this year or even where Bale will end up playing in the years to come. However, Bale has said in the past he think La Liga is the best soccer / football league in the world, so maybe he stay.

It’d be nice to see him back in England, playing for Tottenham again or Manchester United – both clubs eager to have his services and speed in their side although not sure if they can pay the transfer fee that Madrid wants. Bale isn’t getting younger either, at 30 years old he is at the end of his soccer career more than the beginning and will lose some of his speed in the years to come.

Watch Gareth Bale’s amazing run in the 2014 Copa del Rey final. Usain Bolt would be proud of this run. The Welshman faced up Marc Bartra and blew him away with his sensational speed. Passing the ball into space and just sprinting. Real Madrid would go on to beat FC Barcelona 2-1 in a final. Will Bale score a better goal than this in a bigger game against a bigger rival? I doubt it.

Gareth Bale goal versus FC Barcelona in the Copa Del Rey Final in 2014.

Even Cristiano Ronaldo was impressed with this Bale sprint down the field past everyone goal. And then there was Sergio Busquets, who trying to get back then drops in despair after the ball goes in at the top of the box.

Gareth Bale quote – he admired the Brazilian Ronaldo when he was younger:

As a kid, you obviously dream of being a professional footballer. I would watch players like Ronaldo of Brazil and pretend to be him in the playground. But I don’t think about trying to become one of the best in the world or anything like that. I just play football.

Lionel Messi Suffering on the Bench 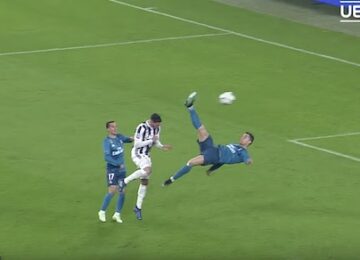 Posted by admin - July 2, 2019 0
Cristiano Ronaldo scored an incredible bicycle kick versus Juventus in the Champions League match and the Italy fans stood and…