Luis Suarez gets trapped in a rondo. FC Barcelona players are renowned for their passing accuracy, quality with the soccer ball at their feet and ability to pick out available teammates under pressure. These characteristics are fundamental in one of their main training drills, the ‘rondo.’

What’s a rondo you ask? A rondo is essentially a keep away game. Sometimes in youth soccer it’s called piggy in the middle. It’s trying to keep two people in the middle from getting a touch on the ball while those on the outside pass the ball around them. It’s fun.

This reminds me a bit of when Cristiano Ronaldo got trapped in Barcelona passing triangle when he played for Real Madrid.

In the following video from the training archives, the Barcelona first team players show their soccer skills with three consecutive 20-touch rondos.

Up to 60 passes were made with Luis Suárez and Joan Barbarà, the assistant coach, in the middle. Check out the reaction from the Uruguayan and his teammates when the three rondos were completed, as well as the punishment they had in store for Suárez! And yes, Pique is very pleased with what appears to be a nutmeg at 17 passes!

Posted by admin - June 26, 2019 0
A series of great saves and stops by the Italian keeper…check it out. Watch More Videos Ronaldinho Overhead Goal Best… 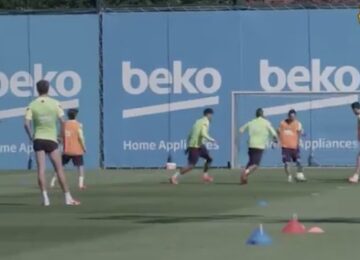 Posted by John Webster - May 21, 2020 0
Of course one of the greatest rondos of all-time would involve Lionel Messi and Sergio Busquets and Barcelona. I can’t…

Posted by admin - June 25, 2019 0
David Beckham on Tonight Show Becks goes on Jay Leno, who is his neighbor actually, and talks about getting the…

Posted by admin - June 26, 2019 0
Arsenal’s Dutch striker Robin van Persie described his sending-off against Barcelona as "a total joke" after his team’s 3-1 defeat…