Wait, prior to this Messi free kick, is there a Sevilla player lying on the ground beneath the wall…? I get it, but it’s still funny. During the Sevilla versus Barcelona match a defender lies down behind the wall when Messi stepped up to take a free kick. So if the wall needs or wants to jump and try to block the Messi free kick he can’t strike the ball under the wall.

But as Sid Lowe mentioned, since there’s a player lying down under the wall there’s now an open man for Messi to maybe pass the ball to for an open shot.

A picture makes it look easy and positions shift faster than we appreciate but it does feel like innovation could be met by innovation. Space and free men to be able to play a pass for a pretty clear shot at goal?

Must be funny before the match for Sevilla to get together and then designate the player who is going to be lying down behind the wall. Barcelona’s Ronaldinho of course cleverly shot under the wall so it makes sense and all but hilarious still to see. You’ve got to do what you can to try to stop Messi. Soon, when the wall jumps, I bet Messi is going to play a wall pass off the back of the defender under the wall and score a goal.

The only way to defend a Messi free kick 👀 pic.twitter.com/xBxVNimub8 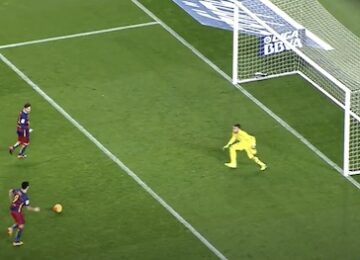 Posted by admin - June 26, 2019 0
Would you have the guts to try Messi’s trick penalty kick in a game? Remember the famous Messi and Suarez…

Posted by admin - June 26, 2019 0
So this guy named Lionel Messi is out injured for Barcelona, which should be bad for the club, right? Well,…

Posted by admin - June 26, 2019 0
The colorful history of the fascinating game of soccer / football. It’s the greatest sport in the world. The most…

Posted by admin - June 26, 2019 0
Sacked. Left on his own. Mutual. So far there’s no clear cut reason why Mourinho has left the blues but…

Posted by admin - June 26, 2019 0
The Seals Greatest Goalkeeper: Eduardo Yoldi En Memoria By Tom Simpson Some years before he died in 1995, during the…