Check out Neymar’s new heel control trick. Neymar even has his tongue out like Michael Jordan when he does the heel control move. The Brazilian forward and Barcelona star’s trademark rabona control move is one he’s doing more often these days in La Liga. In some ways it’s sad he won’t be wearing a Barcelona jersey anymore, but I’m sure he’ll have plenty of tricks and moves to perform at PSG.

Why not use your heel behind the standing leg to control the ball, that’s what Neymar does. At first this just seems like Neymar is showing off, but he actually uses this heel control technique to push the ball forward and throw off defenders. And Neymar uses his heel when he has time, haven’t seen him do it when a lot of defenders are around.

Sure, he could just use the inside or instep of his foot to control the ball, but I’d argue this trick catches defenders off guard, while it also excites the crowd, too.

Watch Barcelona’s Neymar use the inside of heel of his to control a long ball. He makes this trick look easy.

Here’s another picture of the heel control move by Neymar. 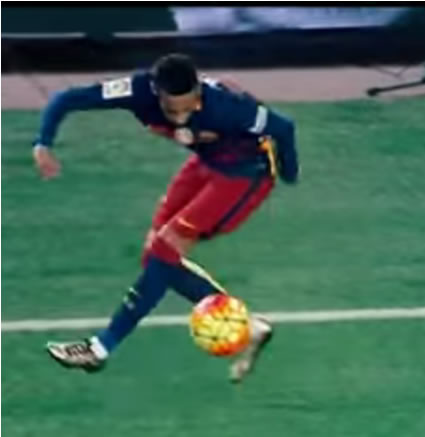 This heel control trick is also something his new PSG teammate, Javier Pastore, likes to do in warm ups.