And this is some exceptional shielding ability too, by Lukaku, as he holds the soccer ball off from the defender. Shielding is an underrated skill in soccer! Yes, master all the Coerver skills but don’t sleep on shielding the ball.

Some might say the defender needs to get in the weight room. Often a player will yell out “weight room” whenever someone throws off another player like they are not even there.

It’s interesting that Lukaku left Manchester United and has only been scoring goals since he arrived in Italy. It shows you sometimes a player just needs a new environment or team or coach to play under so he can regain his goal scoring touch. Remember this young players. Don’t get discouraged if you’re on the bench, just make the most of the chances you get. Confidence will return.

Romelu Lukaku found the back of the net while simply overpowering his defender, helping Inter Milan double take a 2-0 lead in the EuropaLeague Quarterfinals over Leverkusen. Watch Romelu Lukaku score while being pulled down.

Imagine – A Call From Pires

Posted by admin - June 26, 2019 0
Imagine – A Call From Pires Jozy has got to and will go down as the first American soccer player…

Posted by admin - June 26, 2019 0
I think people forget just how good Ruud Van Nistelrooy was for Manchester United. Just a pure out and out… 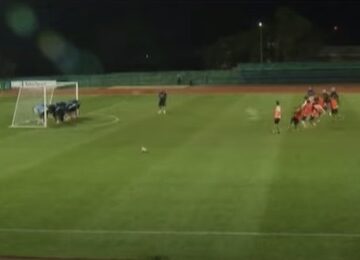 Posted by admin - June 26, 2019 0
Maradona plays butts up game. This is old school from coach Diego Maradona. Back in the day we used to…

Posted by admin - June 26, 2019 0
By Nicholas Spiller There’s an art to pulling off a dive in soccer and drawing a foul. And it’s probably…