Let’s look back at when Ronaldinho was at the peak of his powers playing for Barcelona. When opposing team’s fans cheered him on. Real Madrid fans give Ronaldino a standing ovation after he scores two amazing goals. It’s very rare of course for this to happen, but it did happen to Ronaldinho during an el clasico match when he played for Barcelona.

Nobody could stop Ronaldinho that night and the Real Madrid fans knew it. It’s been said that Maradona received the same cheers from opposing fans at Real Madrid when he played for Barcelona, but those are perhaps the only two times it’s happened. In the age of Messi it surely will or has happened in some form, but not as openly let’s say as when Ronaldinho was unstoppable that night at the Santiago Bernabeu.

“It was a perfect game,” the player himself said that night. “I will never forget this because it is very rare for any footballer to be applauded in this way by the opposition fans.”

Ronaldinho quote: “God gives gifts to everyone. Some can write, some can dance. He gave me the skill to play football (soccer) and I am making the most of it.”

Ronaldinho scored this beautiful goal for Barcelona against Real Madrid in the Bernabeu (November 2005) and even the Real Madrid fans gave him a standing ovation.

New: Even before Cristiano Ronaldo put on the Juventus jersey fans were cheering for him – after his amazing bicycle kick.

In the end of course Ronaldinho scored two goals in the match Barcelona won 3-0, but it wasn’t just his goals, it was the way he embarrassed the Real Madrid defenders throughout the match, with clever flicks and cuts and feints. Ronaldinho was in his own world during this time – the best player in the world. The envy of every big soccer club. The game of soccer was slowed down just for Ronaldinho. He could see and do things before other players realized what was happening. 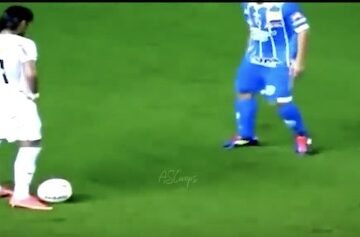 Posted by John Webster - April 5, 2020 0
Personally, I’d like to see Neymar bring back some of his hairstyles from his days playing for Santos. Long hair…

Posted by admin - June 25, 2019 0
Barca at Kezar: It’s Just Practice. Overheard at the Barcelona training session at Kezar in San Francisco: ‘This line is…

Posted by John Webster - July 30, 2017 0
If you’re looking for an indoor soccer center in Colorado, you’ve come to the right place. Below you will find…

Posted by admin - June 26, 2019 0
Michael Essien Nearly Back Does Chelsea still have a shot at winning the Premier League title? Of course they do,…

Posted by admin - June 26, 2019 0
To me, Neymar has taken the art of dribbling to another level. Sure, he’s probably not as effective as Lionel…