Juventus midfielder Weston McKennie’s volley versus Barcelona is a work of art. McKennie, the US Men’s National team player, doubled the Juventus lead when acrobatically smashed the volley into the back of the net. It’s really a shame no fans were there in the Camp Nou stadium to see this goal. The Barcelona fans may have even cheered the volley is was so genius.

Just an amazing and picturesque volley from Mckennie.

He plays a lovely give and go and gets the ball back in the middle of the box and takes his chance perfectly. He is a star now in world football I’d say. And this was a Champions League match to boot. I think Cristiano Ronaldo was even impressed with Weston McKennie’s volley. It’s a lovely chip pass by Juan Cuadrado  back to McKennie too.

Barcelona goalkeeper Marc-Andre ter Stegen had no chance at saving the point blank volley by McKennie. He would also celebrate the goal by kissing the camera. Surely this is the best goal he has ever scored in his professional soccer career.

Ginga – The Gift of Skills

Posted by admin - June 26, 2019 0
From Ronaldo to Robinho to a host of promising footballers. It takes dedication and hours of practice to master some of… 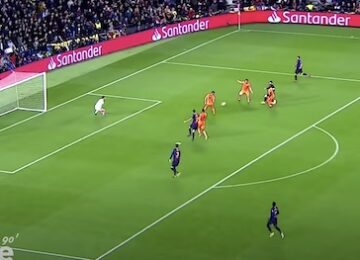 The Art of Passing in Soccer

Posted by admin - June 26, 2019 0
How do you get into the zone when playing soccer? Can you think back to a soccer game when you…

Posted by admin - June 25, 2019 0
Jack Wilshere scores a fantastic goal for Arsenal after a couple give and goes and just genius one touch passing.…